The opponent is a familiar one. The Saluda Tigers (10-3) are going to make their way down Highway 178 with revenge on their mind. Heartbreak has occurred for the purple Tigers, as four of the last five seasons have ended at Hite Stadium, in the UpperState Championship game. All eyes are on Saluda’s ultra talented QB Noah Bell. The big lefty has thrown for over 3,000 yards and over 30 touchdowns this year. He helped navigate a Tiger offense that averages exactly 40 points per 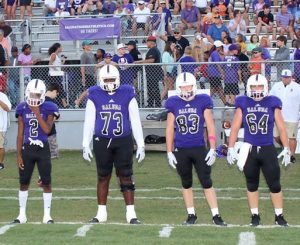 game. He recently was named Index Journal Player of the Year as well as holding a spot on the All-Lakelands team. He can throw, run and he knows the high flying air raid offense like the back of his hand. In this year’s previous meeting, Bell was 38-57 for 393 yards- 2 touchdowns and 3 interceptions. Fifty seven pass attempts in a single game. Conversely, Abbeville has attempted 34 passes this entire season. Two different styles, two different ways to get it done. Turnovers were the story in this year’s regular season Abbeville 48-20 win. Saluda turned it over four times and Abbeville had none. The Panthers have made a nice living off of opponent’s turnovers this season as they are currently +19 in the turnover margin for the year. Historically the Panthers hold a 32-15 all-time record versus the Tigers. Abbeville is 5-0 vs. Saluda in the playoffs, including 3-0 in UpperState Championship games. The Panthers have won eight straight overall by an average score of 31.3 to 14.5.

It’s no secret, it’s no surprise. The Panthers are chasing history. A hard fought 3rd round game

proved that this team, who has faced very little resistance this season, can play a game down to the wire and do what it needs to do to win. Defensive stands, time consuming offensive drives, it’s all the same to this group of Panthers. Saluda uses the air raid, Abbeville used the ground and pound. The A-Bone offense has produced two one-thousand yard rushers, with a third only 112 yards away. They average 38.8 points per game and 336.5 yards per game on the ground at nearly eight yards per rush. The Panthers have also been explosive this year. It’s not just three yards and a cloud of dust. They have zipped up and down the field with 72 plays of 20 or more yards this season. They can win a drag race or a marathon. The defense has been dominate. They hang their hat on creating turnovers, tackles for loss, and bone jarring hits. The Panthers give up 10.5 points per game this season and have played quite the collection of talented offensive teams. Then there’s the streaks. 40 straight home wins are on the line Friday night. 34 games in a row. 23 straight playoff games and a chance to play for an unprecedented 5th straight State Championship.

Do you like being in electric, air so thick you can cut it, hair standing on the back of your neck type atmosphere’s? If so, Hite Stadium is place to be. It’s going to be a good ole fashion donnybrook with a trip to Benedict on the line. Enjoy your Turkey on Thursday, because there’s a championship to win on Friday. The gates open at 6pm. Be there early. A record setting crowd is expected. As Always…