A soggy Friday night at Hite Stadium saw the undefeated Abbeville Panthers roll through another opponent on their way to history. Andrew Jackson entered the game with the state’s number one defense. They didn’t leave that way though. The Panthers controlled the line of scrimmage and rolled through Andrew Jackson 37-0 while racking up 406 yards rushing. The Panthers laid the blue print of what a top ranked defense really looks like. At halftime, Abbeville had as many points as AJ had yards (23). Another challenge checked off the list, another hurdle cleared. It only gets harder from here as we now enter the State Quarterfinals, which is the 3rd round of the playoffs.

The Gray Collegiate War Eagles (9-3) are enjoying a the best run in program’s short six year history. They captured the Region 3 – AA championship this season, a first for the school, by rolling through their region 4-0. They outscored their region opponents 217-27. Granted, their 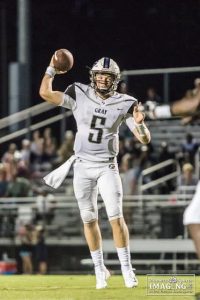 region opponents finished the year with a total combined record of 12-33, but averaging 48.4 points per game for an entire season is hard to do against anybody. The War Eagle offense gets all of the publicity, and rightfully so. They are dynamic, high flying, huge, and you can insert about any other adjective you’d like to insert here. In other words, they are really, really good. QB #5 Hunter Helms is a 6’2″ 190lb gunslinger. He has a huge arm, a quick release, very accurate and rarely makes mistakes. He protected by the biggest O-Line the Panthers have seen yet this year. The GC offensive linemen’s weights are listed as: 290-270-315-285-285. Helms has thrown over 40 touchdowns this season, and he has four impressive wide outs to sling it to. #4 Omarion Dollison is a senior. It’s his first year on the team, he’s an Irmo native and was selected to the North/South game. #1 Nykeem Smith is 6’5″ 200lbs and has serious speed. #17 KZ Adams has a receiving, rushing and kick return for TD this year. #7 Jack Wood is all over the field as well. Again, the Panthers are going to be tasked with slowing down one of the most prolific offenses in the state, regardless of classification.

If history is any indication, the Panthers are up for the challenge. Physicality is this team’s calling card. They like to hit and inflict as much brut force as possible on their opponents. The Panther defense has given up one score or less in 7 of their 11 games this year. Running teams, throwing teams, it really hasn’t mattered. The Panther defensive front has been unblockable for the majority 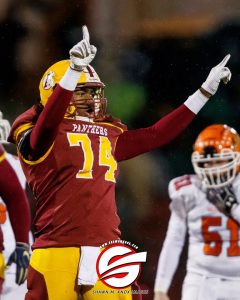 of the season. #52 Carson Smith leads all D-Linemen with 72 tackles – 8 tackles for loss and 4 sacks. The others are, Ar’Darius Burton (32tk-4tfl-4sk), Kedorian Howland (19tk-3tfl-2sk), Demairis Hill (38tk-7tfl-2sk), Ami’Leon Mattison (31tk-3tfl-1sk). Even when these guys aren’t making the tackle they are causing chaos in the offensive backfield. They clear the way for the linebackers #15 Luke Evans (90tk-9tfl-5sk) #16 Joc Norman (53tk-2tfl-1sk) and #17 Jhalyn Shuler (71tk-11tfl-2int). #8 Quadarius Guillebeaux leads the team with 5 passes deflected, he and #20 Jeremiah Lomax both have a team leading 3 interceptions. #25 James Haddon(31tk – 4 pbu) is another physical presence in the defensive backfield along with #6 Cruz Temple(38tk-2tfl-1fr) who relishes the chance to light up ball carriers . This year’s defense has given up 8.5 points per game, among the best statewide. They have also swiped the ball 26 times from their opponents this season, while only turning it over 7 times. A +19 turnover margin is basically PlayStation numbers. You just never see that big of a disparity in any level of football.

Offensively, Martico Jackson (121-1,001-8) can now add his name to the list of Panther thousand yard rushers. Jackson eclipsed the milestone in last weeks game. JD Moore (118-1,167-15) is on his way to breaking his single season best of 1,354 yards rushing from last season. QB Thomas Beauford had his best game on the ground versus the #1 defense last week. He carried it 9 times for 70 yards. #4 Tyrell Haddon (82-754-11) completes the backfield with his blazing 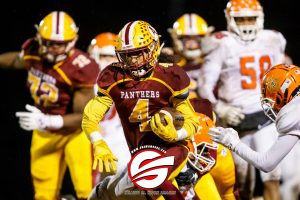 speed, and should the Panthers’ season continue, he has a very good chance of becoming the 3rd Abbeville running back this season with 1,000+ yards. The Panthers are scoring 38.8 points per game and average 332.5 yards per game on the ground. An average of 8 yards per carry is eye popping. All of these stats reflect on a dominate offensive line, whom should wear with pride, the fact that they could have three, one-thousand yard backs running behind them. And don’t forget about special teams. Dylan Beauford’s right leg will play a huge part in this game. A touchback on kickoffs is huge when you’re playing a team with multiple players that take it to the house. Pinning the opponent 80 yards away from the endzone, against this Abbeville defense, is an incredible weapon to have.

The third round. The quarterfinals. There’s only four teams left in the UpperState. Two more wins puts you at Benedict on December 6th. The Panthers are 19-12 all-time in round three. Can they get their 20th all-time quarterfinal win? Can they win their 23rd straight playoff game? A monstrous, well oiled machine stands in their way. Come see what all the hype is about Friday night at Newberry College. Kickoff is at 7:30. Abbeville is the away team, so get there early. It’ll be an electric, packed house with a spot in the UpperState Championship on the line. As always…