It was another historic night at Hite Stadium this past Friday. Family, friends and fans didn’t have enough time to take a bite of their popcorn before the Panthers stormed out of the gate, and built an insurmountable lead against an outmanned Lewisville team. The Panthers lit up the scoreboard with 85 points, the most points ever scored in the 102 year history of Panther football. The 117 total points was also a record for points scored at Hite Stadium. So, if you were there, you witnessed history. This week the competition stiffens. The opponents only get better and better as the weeks pass in the playoffs. For the second year in a row the Andrew Jackson Volunteers make the trek from Kershaw, SC to historic Hite Stadium.

The Vols are 10-1 on the season. A lone loss to Buford kept a Region IV championship just out of reach for Andrew Jackson.  This team has seen a recent resurgence of success for a program that had previously been in a football drought. Twenty two seniors on this years AJ squad has propelled them into the 2nd round of the playoffs by beating Christ Church 52-0 last week. The Volunteers

have a stock pile of talent on both sides of the ball and are bringing some impressive numbers with them. How impressive? How about the #1 defense in the state. AJ has pitched six shutouts this season, they are only allowing 5.5 points per game and no one has hit the 20 point mark on them all season long. They didn’t allow a single point until September 20th when they beat North Central 40-7. Lewisville is the only common opponent that the Panthers and Vols share. AJ took care of the Lions 51-18 in mid October. So, why are they so good? Talent. The Rock Hill Herald named #15 Anthony Izzard their Defensive Player of the Year. They had about 20 high schools to choose from and Izzard got the nod, and for good reason. He’s recorded 74 tackles – 5 sacks and 4 interceptions on the year. #50 Gavin Phillips is a hard nosed, ball hawking middle linebacker and they are complimented on the back end of the defense with all world cornerback #1 Tyliek Elder. Head Coach Todd Shigley, also Rock Hill Herald Coach of the Year, has this defense playing fundamentally sound, hard nosed football. They don’t make mistakes and they force their opponents into turnovers. Offensively the Vols are primarily a four-wide spread team. They utilize a big offensive line. #61 Eli Mackey was Offensive Lineman of the year. He’s graded out at 91% for the season. He’s big too, 6’4″ 260 and #60 Keshawn Brown is right beside him at 6’2″ 250. They protect a very accurate and mobile QB #8 Chase DeBruhl. With a ton of wide receivers to choose from, this offense can run and throw with the best of them.

Abbeville continues to click right along. Vaporizing anything in it’s path for a 5th consecutive state title. There’s been a lot of talk leading up to this 2nd round game about how good the 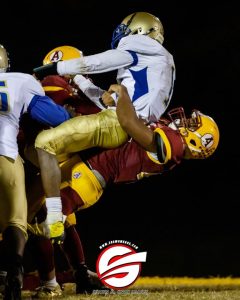 AJ defense is, and rightfully so. However, the Abbeville defense is pretty doggone good too. The Panthers only give up 9.3 points per game and allowed the most points on the season last week when Lewisville scored 22 points versus most of the younger Panther players. #15 Luke Evans continues to lead the team in most defensive categories. He has 83 tackles – 9 tackles for loss and 5 sacks. #17 Jhalyn Shuler (67tk-10tfl-2int) and #52 Carson Smith (66tk-8tfl-3sk) have terrorized opposing offenses this season as well. Jeremiah Lomax leads the team in interceptions with four. They are going to be in charge of stopping a prolific AJ offense. Meanwhile, the Panther offense has maybe it’s biggest test of the year in front of them. The offensive line comprised of a combo of Trai Jones, Davon Bowie, Conner Nickles, Davis Sutherland, DeMichael Johnson, Jake Adams, Jim Porter and Ean Laughlin will be the focal point this week. The Hogmollies up front will be tasked with blocking the states #1 defense so that Panther ball carries can find enough real estate to utilize their blazing speed. Martico Jackson needs just 44 yards to become the 2nd Panther running back to break the 1,000 yard mark this season, and just two more TD’s to reach double digits. JD Moore (108-1,024-13) broke the thousand yard barrier two weeks

ago, and Tyrell Haddon (72-713-11) has a great chance as well. QB Thomas Beauford has grown into a passionate leader and ball distributor as the season has progressed. His three total TD’s last week helped put the game out of reach.

Something has to give. The Panthers score 40 points per game and give up 9. AJ scores 37 points per game and gives up 5. Who will limit mistakes? Who will set the tone early? Can either of these teams dominate the other physically? Who will emerge as the baddest bully on the block? The chin straps better be pulled tight, there’s gonna be some thumping at The Hite Friday night. Kickoff is set for 7:30. Tickets are $8 and the gates will open at 6:30. A clear bag policy is always in effect, and only SCHSL passes are accepted for entry. As always…