Before we preview this week’s game the atownpanthers.com staff would like to congratulate the 2019 Abbeville Panthers on their Region 2 – AA Championship. Their 5th straight and 29th region championship in school history. The Panthers moved to 8-0 on the season and 4-0 in region play with a dominate 48-20 win over Saluda. It was a back and fourth game until the Panthers pulled away in the 3rd quarter. Leading 35-14, Panther running back Tyrell Haddon (10-165-2) took a hand off 75 yards for his 3rd TD of the night. The score was 42-14 and that was the nail in the coffin and the coaches emptied the benches. It was a banner night for the Panthers. An electric, capacity crowd watched the boys in garnet and gold clear another hurdle toward their #drive4five.

This weeks opponent is a very familiar one. The Ninety Six Wildcats are 4-5 on the season and 1-3 in region play. This will be the 58th all time meeting between Panthers and Wildcats. Abbeville leads the all-time series 43-13-1 and has won the last six meetings.  First year head coach Matthew

Owens took over a squad that lost a ton of playmakers off of last years team that finished 9-3. #2 Josh Booker is the focus of the offense. He’s fast and experienced. The Wildcats has primarily worked out of the “I-Formation” this year. They are balanced in the run and pass, but establishing the run is their main objective. Play action passes, bootlegs and many combos of each are much more effective if the run game is working. The Wildcat defense has used multiple fronts and alignments this season. One would expect to see a “stacked box” against the ground heavy Panthers. Meaning, they will have eight, nine, even ten players at times near the line of scrimmage, trying to limit rushing lanes and clog any gaps that a rusher can squeeze through.

Abbeville is just doing Abbeville things. 30 consecutive wins, 19 straight region wins and now, a #1 seed heading into the playoffs. But don’t ask Abbeville head coach Jamie Nickles about the playoffs yet. “We are very focused on the task at hand. Ninety Six is big, they are fast and physical. They want to dominate the line of scrimmage and we are in for a long night if this game doesn’t grab our full attention. The playoffs will take care of themselves, but our focus is Ninety Six. Our senior leaders, our team captains, they’ve done a great job of keeping their focus on one game at a time.” 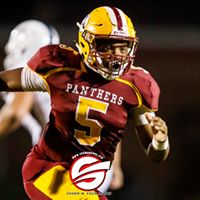 That focus has led to some impressive numbers so far this year. As a team the Panthers are averaging 32 points per game while giving up 8. Those eight points are the 2nd best scoring defense in AA and the #3 scoring defense in the whole state regardless of classification. Only 2A Andrew Jackson (6.0) and 1A Wagner-Salley (7.8) are ahead of the Panthers. The offense is grinding out 318 yards per game on the ground. A big physical offensive line is complimented by a stable of speedy running backs who are dashing to 7.5 yards per carry so far this season. The Panthers are not a ‘three yards and a cloud of dust’ team, as some may think. The offense has produced 48 plays this season of 20 or more yards, an average of six explosive plays per game. The ball control, time consuming, big play capable A-Bone offense has developed into a well oiled machine as the season has progressed. Another impressive stat is the turnover margin for the year. The Panthers are +13 in the turnover margin. They’ve recovered 9 fumbles, intercepted 11 passes and only turned the ball over on offense 7 times all season. A +13 turnover margin will win you a lot of ball games all in itself.

This could be the last road game for awhile, so Panther fans are encouraged to show up loud and proud in Ninety Six this Friday night. Kickoff is at 7:30. Next week we will have a full playoff preview with completed brackets for the AA classification. As always…