The A-Train keeps a’rollin down the track. The Panthers improved to 6-0 on the season and 2-0 in region play this past Friday night with a 52-14 win over Fox Creek. From the opening kickoff the boys in Garnet and Gold were simply bigger, faster and more physical than the Predators from North Augusta. This week is another chance for the Panthers to improve their playoff seeding, and take another step closer to a possible region championship. Petticoat Junction is the destination, home of the Silver Bluff Bulldogs.

Abbeville and Silver Bluff (2-5 / 0-2) are no strangers on the gridiron, even though their campuses are separated by a scenic hour and a half drive. Twice they have competed for a State Championship against each other. Silver Bluff defeated Abbeville 28-21 in the 2000 title game at Williams-Brice Stadium. That Bulldog win capped a four game winning streak against the 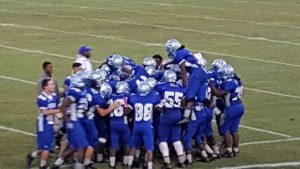 Panthers. Since then, AHS has reeled off six straight wins in the series including a 45-27 win at Benedict College for the 2015 title, and most recently a 36-7 win at Hite Stadium last season. Silver Bluff alum, D’Angelo Bryant, is in his 2nd season at the helm of the Bulldogs and has been tasked with rebuilding the traditionally strong blue and silver Bulldogs. Bryant sports a 7-10 overall record thus far in the process. SB has gone back to their roots offensively. A double wing, and variations of the double wing is what you’ll see Friday night. A strong ground game with various running backs toting the load. It takes a very disciplined defense to combat a well ran option style offense such as the Bulldogs run. On the defensive side of the ball, SB lines up in a 3-4 defense. When correctly executed, the 3-4 can be very confusing as far as blocking assignments are concerned.

The Abbeville Panthers are trying to extend a 28 game win streak, including 18 straight wins in true road games. The offense is clicking, the O-Line and running backs have found th 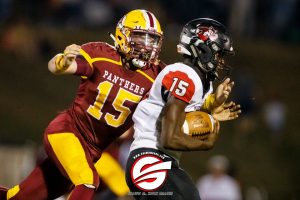 eir groove and is churning up yardage, game clock and points at a break-neck pace. JD Moore still leads all rushers with 714 yards rushing and 6 touchdowns. As a team the Panthers average 285.4 yards rushing per game at nearly 7 yards per carry. For the season, AHS averages 7.1 yards per play while the defense only gives up 3.5 yards per play. In fact, the Panther defense has the 2nd ranked scoring defense in the state. Andrew Jackson High, a playoff opponent last year, is the only team ahead of the Panthers in scoring defense this season. Those blue collar, bloody knuckled thumpers allow 7.6 points per game while the offense scores on average 27.4 points per game. Part of this season’s success is also the +8 turnover margin. Expect to see much of the same in Petticoat Junction Friday night, a physical brand of football where the Panthers try to out hit, out run, and push around the SB Bulldogs. The maturity of this team, it’s internal leadership and will to win will be tested. A homecoming top 10 match-up, defacto region championship game with Saluda looms next week. Can these Panthers not look ahead and focus on the Bulldogs? Time will tell. See ya at Silver Bluff, under the lights. Kickoff is set for 7:30pm. As always…