The Abbeville Panthers flexed their muscle last Friday night with a very physical brand of football versus the Emerald Vikings. The Panthers shut out the Vikings on their way to a 20-0 victory. A very workman like performance from the Panthers especially on defense. The Panthers were the smaller team in the contest and ultimately stood toe to toe, trading haymakers with the much bigger 3A Emerald team. It was a fun game to watch, if you like the physicality of football. This week you’ll see two totally different styles on the field. Abbeville with it’s patented A-Bone run game, and Southside Christian with it’s spread air raid offense.

Friday night you will see the first match-up of the season with two teams both ranked inside the top five in the SC Media Poll. Abbeville (2-0) is ranked #1, receiving all 12 votes. Southside Christian (3-0) is ranked #4. The entire state remembers the last game that these two powerhouses played. In a back and fourth game, the Panthers found themselves trailing 21-20 with 2:34 left in

the game. A 99 yard kickoff return for a touchdown by Cortney Jackson, the subsequent two point conversion and a last ditch effort by SSC was thwarted by the A-Town defense. That sequence of events sent the Panthers to Benedict and sent the Sabres home with revenge on their mind.

SSC lost 16 seniors to graduation last season. However, JW Hertzberg, a three year starter at QB is back for the Sabres. He played a gutsy game in last years UpperState Championship game, returning from an ankle injury and leading his team to a near 4th quarter comeback. The Sabres also return one of the better running backs in the state,#44 Malory Pinkney. He rushed for over 1,400 yards last season and will get the majority of the carries this year as well. Pickney went for 201 yards versus Woodruff. #13 Hosea Mattison will be a big target for Hertzberg. He had 7 receptions for 109 yards and 4 touchdowns last week. SSC has a big, fast, physical defense. They are well coached and this year’s edition of the Sabres are clicking quite well. As of this week they are averaging 53 points per game on offense while giving up 8 points per game defensively. Last week they defeated 3A Woodruff 37-10. This is a complete team with great talent. There’s another team with great talent and great coaching waiting on the Sabres “revenge tour”.

The Panthers have been on the hit list for the last four years. Revenge tours, targets on their back, throw in whatever cliché you’d like, they’ve heard it. Yet they block out the outside noise and just keep working. When the gates open at Hite Stadium Friday night, Abbeville will do what Abbeville does. They will play a physical, relentless brand of football that has been taught here for 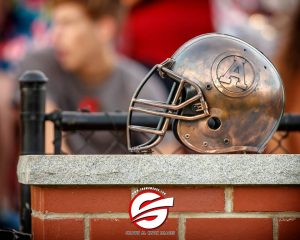 generations. The line of scrimmage will be a fun area to watch. Led by seniors Carson Smith and ‘Bone’ Burton they will be tasked with disrupting the timing of the SSC offense. While linebacker Luke Evans, and all of the Panther DBs will usually be in pass coverage. The Panther offense got a spark last week with the debut of Navi Marshall in the backfield. In limited action, Marshall averaged over 5 yards per carry, while JD Moore is churning up 7.4 yards per carry and Martico Jackson is adding over 10.4 yards per rush. Can the Panther offensive line dominate the line of scrimmage against the big SSC defense? That’s their moda operandi. Grind it out, pound the rock, control the clock, and keep the SSC offense off of the field. Will the Panthers defend their home turf? Can SSC keep their revenge tour in tact? To find out, you better show up early. The town will roll up the sidewalks at 6pm and seats will be at a premium.

Gates open at 630. A clear bag policy is mandatory. Extra parking available at Grace UMC, and GUMC is also hosting a 5th quarter following the game for the youth. Get ready Panther fans. This is going to be a good one. See you at The Hite. As always…