What a night it was. When the final whistle echoed through Charlie W. Johnson Stadium the Abbeville Panthers (14-0) accomplished a feat that few teams have ever accomplished. Four consecutive State Championships. The Panthers dominated the game from the opening kickoff and the Class of 2019 cemented themselves as the winningest class in AHS history.

To recap the game, it was never in doubt. Barnwell (13-1) received the opening kickoff and immediately met a fast and ferocious defense. The Abbeville defensive line refused to be blocked. They pressured, hurried and harassed Barnwell QB Craig Pender all night. The Panther linebackers flew to the football and defensive backs blanketed the Barnwell receivers. JD Moore capped a 6 play 64 yard drive on the Panthers opening possession with a  22 yard touchdown run. Moore’s 21st TD run of the season. Barnwell found the endzone on a 71 yard punt return to tie the game, and that was the last time the WarHorses would see the endzone for the next 40+ minutes of game time. Cortney Jackson raced to his first of two touchdowns on the night with a  37 yard run, stiff arming and spinning his way to a Panther lead late in the first quarter. After yet another Barnwell three and out, Jackson sprinted 16 yards to the endzone to put the Panthers up 21-7 early in the 2nd quarter. Barnwell actually mounted a drive as the first half was nearing conclusion. Then, Panther senior defensive back David Cobb stepped in front of a Pender pass and took it to the house 94 yards. The Panthers led 28-7  at that point and the game was basically a formality. Abbeville received the 2nd half kickoff and it took them less than three minutes, and six plays for JD Moore to find Ja’Bryan Sanders running wide open down the middle of the field. The 35 yard touchdown toss was Sanders’ 5th TD reception of the season. More defensive dominance lead to a punishing 11 play 64 yard drive that took nearly 5 minutes of game clock away. Dominick “The Bus” Washington bulled in from a yard out to extend the Panther lead to 41-7. With a minute left in the 3rd quarter, JD Moore found Ja’Bryan Sanders wide open yet again, and watched as the speedster out ran everyone for a 68 yard touchdown run. That touchdown ended the Panthers scoring on the night. It also sent a large majority of Barnwell fans to the exits. Barnwell entered the game with the #1 scoring offense in AA. They finished with 254 total yards (68 of which came on the final drive), three turnovers and was shut out by the Panther’s first team. The starters were pulled and the celebrations began. A late Barnwell touchdown closed out the scoring and the Panthers won their fourth consecutive State Championship, the 10th in school history by a final score of 48-14.

The Seniors on this team deserve to be celebrated as the greatest Senior class to ever walk the halls. Here are some of the numbers from their career.

Record since sophomore year (most didn’t play as freshman): 42-1-1

The never lost a playoff game 20-0

The average score in all four State Championship games: 39 vs. 17

The Panther offense only turned the ball over 9 times all season. 3 interceptions, 6 fumbles. The Panther Defense intercepted their opponents 18 times and recovered 21 fumbles. That is a +30 turnover margin on the season.

The Panthers finished with 85 plays of 20 or more yards on the season.

The Panther Defense only allowed 16 touchdowns all season. 8 rushing, and 8 passing.

Opposing offenses finished 31/165 in third down conversions on the year. An 18.8% success rate.

Abbeville is now tied for 2nd in All-Time State Championships, in South Carolina, won on the field with 10. Only Byrnes (11) and Lake View (10) have double digit championship wins.

Head Coach Jamie Nickles is now tied for 2nd in ALL-TIME State Championship wins (6) as a head coach in South Carolina. Only legends Willie Varner, and John McKissick have more, and they are tied with (8)

Congrats to the 2018 Abbeville Panthers. You rewrote history and did it in dominate fashion. It’s been a pleasure covering you all for this season and I can’t wait until next year. Get ready A-Town fans only 249 days til kickoff! 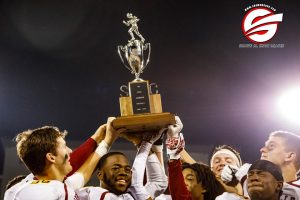