The late, great Vince Lombardi once said, “….I firmly believe that any man’s finest hours – his greatest fulfillment of all that he holds dear – is that moment when he has worked his heart out in good cause and lies exhausted on the field of battle – victorious.”

Have truer words ever been spoken?  You take pride in things that you’ve worked for. You take care of, and appreciate those things a little more when you’ve given your all to achieve that certain prized possession. The culmination of this 2018 football season is just hours away. The work, the sacrifice, the determination started in January. Work-outs, weight lifting, spring practice, 7 on 7 camps, summer camp, fall practice and thirteen grueling games have led us here. The 2018 AA State Championship Game. There are 60’ish young men, that will wear the Garnet and Gold Friday night, that have worked their hearts out to get to this point. A great opponent awaits with the same hopes and dreams, but only one team can hoist the trophy after forty-eight minutes of battle. Let’s look at these two worthy adversaries.

The Barnwell War Horses (13-0) are making their first State Championship game appearance in 21 years. They’ve been close in years past, but couldn’t quite find the right formula to make it out of the Lower State Championship game. On eight different occasions since 1960, the War Horses season ended in the Lower State Championship game. On seven different occasions, they made the State Championship game. They are 2-5 in State Title games. The wins were back to back in 1987 and 1988. Both wins came against Pageland-Central. To say this team is hungry to snap a 30 year title drought would be an understatement. So hungry, they scrapped their traditional wish-bone offense last season for a wide open spread attack. Barnwell head coach Dwayne Garrick said in the State Championship press conference, “Well, we played in the Lower State championship the last two years, and the defense was just so tough in the last two football games that we just figured we had to do a little something over the offseason to get us over the hump,” Garrick said. “That’s kind of been the phrase we’ve used all year is ‘over the hump.” To fine tune the newly installed offense, Garrick explained, “We were real heavy on 7 on 7s this summer, we’ve just made that switch and made that transition, and a lot of it has to do with Craig. I mean, Craig throws the 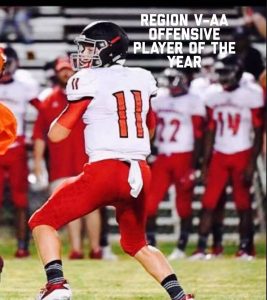 ball very well, gets it out of his hands quick. So, really thought that was something we’d have to do to get to this point.”

The Craig he mentions is junior quarterback #11 Craig Pender. Pender has had a very nice season passing the ball. He’s thrown for nearly 2,300 yards with 35 touchdowns against just seven interceptions. His 70% completion rate is as impressive as the rest of his stats. He also has 43 carries for 216 yards rushing. Of course he needs help, and he has plenty of it. #5 Dallyon Creech, a 5’11” 170lbs junior is the War Horses leading receiver (33-533) and leads the them on the ground as well (95-680). In fact, Barnwell has produced the #1 offense in AA football this season, scoring 571 points. They average 43.9 points per game while surrendering 12.2 points per game. The 12.2ppg is good enough for the 5th best defense in AA. The offensive line is huge. Bookended by tackles #67 Briggs Kearse (6’4″ 315) and #75 Isiah Williams (6’4″ 300). The wide receivers are tall and fast, and there’s a hundred of them.

Abbeville head coach Jamie Nickles said “Their size and speed is impressive. They look like Clemson when they step off the bus.”

Coach Nickles is no stranger to games at Benedict College. Friday night when the whistle blows, he will have coached in his 7th game at Benedict. He has been a part of ten State Championship games as a coach and one as a player as well. The spotlight this season hasn’t necessarily been on any one particular player. Instead, the whole senior class, who will strap on the A one last time, has been the focal point. The numbers they have put up are astronomical. 53-3-1 is their record since stepping foot on campus. The three year starters are 41-1-1. They’ve claimed four straight Region Championships, four straight Upper State Championships, and have won three consecutive State Championships. The most in school history for any Senior class. Win, lose or draw this Class of 19′ will be remembered for generations.

This particular team has dominated opponents since day one. The 57-0 shut out a Lincoln Co. was an eye opener, and set the tone for much of the season. The Panthers (13-0) rarely played starters in the 2nd half of any game this year until deep in the playoffs. The A-Bone offense has produced points (42.8 ppg) and yards (4,759) by the boat loads. They’ve been quick strike, with 78 plays of 20 or more yards, and they’ve been methodical sustaining drives of 10 or more plays on numerous occasions. They’ve scored by land, (58 rushing touchdowns) and by air (12 TDs). The leading rusher is junior quarterback JD Moore (157-1291-20). Moore is the point guard that distributes the ball and maintains a cool, level headed approach to games. Moore is also the fourth QB to lead the Panthers to a State Championship game in as many years. Cortney Jackson (111-916-16) leads all running backs in yardage and touchdowns, but also leads the team in all purpose yards with 1,297 rushing, receiving and kick returns. Ja’Bryan Sanders (71-624-11) has also eclipsed the thousand yard mark in all purpose yards with 1,196 total yards. Dominick Washington (96-780-3) has been the steady hand at fullback, used as a battering ram run blocker and short yardage specialist. None of those rushing and passing yards would be possible without the consistent, road grading blocking of the Abbeville O-line. Trai Jones, DaDa Bowie, Conner Nickles, Jake Hill, DeMichael Johnson, along with Tillman Allen at tight end have played very well this year. They have graded out at 90% for the season. Quad Woods (10-135-4) stretches the field at wide receiver and is an outstanding down field blocker. Put all of those key ingredients together and you’ve got a record setting, speedy, powerful offense that’s looking to make history.

Defense wins championships and the Panther defense has been championship caliber since Week Zero. Recording four shut-outs and four other games where only one score was recorded, points are at a premium for opposing offenses. Leading tackler, Tyreke Campbell (91 TK – 5 TFL – 1 SK)  has set the tone all season with smart, physical play at his linebacker position. Campbell will be the first to tell you that the defensive line helps give him space to roam and find the football. Nate Temple, Carson Smith, Ar’Darius Burton, and Jihad Washington have willed their way into the opposing backfields all season. Temple, a University of Pittsburg commit, leads the team with 12.5 sacks and 11 more tackles for loss. Smith leads the team with 16 tackles for loss. All in all the defensive line starting four have collected 261 tackles, and 36 tackles for loss. Jahlyn Shuler has roamed the entire field all year long. He may cover a wide receiver one play, he may be in the backfield stuffing the run the next. Shuler has 84 tackles, 10 for loss and a sack on the season. Malik Leach, David Cobb, Quadarius Guillebeaux, Joc Norman and Gabe Calhoun have gelled into a force in the defensive backfield. Along with Luke Evans, and Cruz Temple the Panthers have swiped 16 interceptions and recovered 18 fumbles on the season. A +28 turnover margin has propelled this defense into rarified air. They have also only allowed their opponents to convert 26 of 153 third downs over 13 games. Maybe the biggest weapon on the team is the right leg of kicker Dylan Beauford. He’s been consistently accurate on PAT’s putting 56 of 63 through the uprights, and he’s connected on 7 of 9 field goals. His long of 47 yards in last weeks Upper State Championship game was a thing of beauty. The points are important, but his kickoffs are equally as important. Most every kickoff sails into the endzone and pins the opponent 80 yards away from their endzone. An 80 yard drive against the aforementioned defense, has been a huge key to the success of this team.

The Panthers went wire to wire ranked #1 in AA this season. They’ve won 21 games in a row, including three consecutive State Titles. Unfortunately that means nothing Friday night. The wins, the rankings, the blow-outs. None of that matters. I guarantee that Barnwell does not care about the accolades and awards this team has gathered over the last four years. This group of Panthers will have to play their best game yet. They get one more shot to play with their brothers. Some of these guys have played together for 10 years and this is the last time they’ll get to take the field as a team, as a band of brothers. They will get one last chance to prove to the world who we know they are. Champions.

See ya at Benedict. As always…