For those of us that lived through the 90’s Central High School doesn’t ring a bell, but throw the word Pageland in front of or behind it, and memories begin to flood in. Some of those memories are great, some are heart wrenching. The 1971 Panther football team defeated Pageland-Central 14-7 to claim Abbeville High’s very first State Championship. The Panthers would not defeat the Eagles again for another 29 years. Granted, they only played a handful of times during the playoffs, but the drought was painstakingly brutal for many very talented, State Championship caliber Panther teams. The Eagles hold an all-time record of 7-2 versus the Panthers. The 1971 win, and a 2nd round playoff win in 2000 are the only two victories in the series for the Panthers. The win in 2000, a 28-25 slobberknocker, came in the waning moments as Layfette Miller (RIP) scored with only seconds remaining. In the 3rd round of the 1994 season, the Panthers were poised for a State title run behind Troy Gamble, Theo McCouller and many other Panther greats, only to lose on a controversial call late in 4th quarter by a score of 7-2. The 1997 Panthers, fresh off of an undefeated State Championship in 1996 lost in the Upperstate Championship game 14-7. And the following year, in 1998, a last second touchdown propelled the Eagles to a 29-28 win. As you can see, these two teams bring out the best in each other. Games are tightly contested and as physical as a bunkhouse stampede. The odds makers have the Panthers as a heavy favorite, but if history is any indicator, this will be one of those bloody nose, bruised knuckles knock down drag out, type of games. A game not for the faint of heart, a game that will test your manhood. Let’s look at how the Eagles and Panthers stack up on paper.

The Central Eagles are 8-4 on the season.  They lost their first two region games of the year to Buford (14-12), and North Central (41-21) and finished 3rd in Region 4, but they haven’t lost since. Each of the Panthers first two playoff 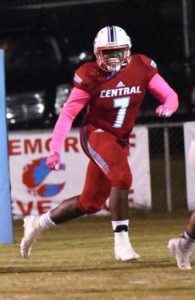 opponents have come from Region 4. Don’t let the North Central game score fool you. There were multiple Eagle players that were unavailable to play in that game. The Eagles and the Panthers are very similar in styles of play. Central is a option, run first, pass maybe, team. This team is very different from the pass happy teams the Panthers have played the last several weeks. To make the option offense work you must have a great offensive line, a savy athletic quarterback, and a combo of speed and power from your running backs. Sound familiar? Central has all of that and then some. Led by quarterback #17 Curt Chapman, the Eagles have a stable full of running backs to carry the load. Senior #2 JR Reid (133-1,103-11) is the work horse who chews up yards at a nice 8.3 yards per carry. #5 Jamiah Smith (92-623-7) is another big running back that they use as a battering ram. When they throw, #1 Ron Benjamin (11-250-4) is the main target. The Eagles have used eleven running backs this season. They also employ a very big, fast defense. #7 Daylan Robinson is the unquestioned leader. He’s a four year starter at middle linebacker. He’s 6’2″ 230lbs, runs a 4.8 forty, and averages over 10 tackles a game. Robinson is a North/South All-Star selection with over 110 tackles on the season. He’s a grown man that plays fast and as physical as any linebacker in the state.

The Panthers are going to basically be looking in the mirror Friday night. Abbeville’s run heavy offense is a little more spread out and sideline to sideline oriented than that of their counterparts, but the similarities are scary. The Panthers are led by junior quarterback JD Moore (117-1,095-18). A gifted runner who has vision and speed. The combo of Courtney Jackson (87-774-14), a Shrine Bowl and All-Lakelands selection, Ja’Bryan Sanders (57-513-11) and Dominick Washington (81-681-3) have ran their way to an 11-0 record this season. The Abbeville offensive line, who will be the first to tell you that they want to improve on last weeks performance, will be greatly tested again with constant blitzes, and a stacked line of scrimmage. All-Lakelands selection Jake Hill will lead the Panther hogmollies in what may be their most physical game to date. 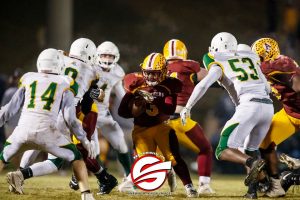 If the old cliché holds true, then the Panthers should be just fine. The cliché? Offense sells tickets, defense wins championships. Four Panther defenders were selected to the All-Lakelands team. Carson Smith, Nate Temple (also a Shrine Bowl selection), Gabe Calhoun, and Dylan Beauford were all inducted into the all-star team this past week. Beauford was selected as a punter. They harassed quarterbacks all season long collecting 28.5 sacks on the season. They play in the opponents backfield with 62 tackles for loss, and they make their opponents turn the ball over, a lot. The Panthers have caused 28 turnovers on the season. Third downs are especially tough for the Panthers opponents. They have allowed just 19 third down conversions on the season, out of 133 attempts. That’s 14.2% and that number is insane. The Panther defensive backs like to hit, and they’ll get their chance this week as they’ll be counted on for run support in this game.

If you enjoy old school, smash mouth football. This is the game for you. If you like big hits, and a game that will be played by two very good football teams. You don’t want to miss what I’m sure will turn into an old fashion donnybrook. The winner of course will move on to the Upperstate Championship game, and the losers season will end. Can the Panthers exorcise the demons of the 90’s? Will Central derail Abbeville’s historic run? The answer to those questions will be played out in front of your very eyes this Friday night inside Hite Stadium.  Gates open at 6:30 and kickoff is at 7:30.

I hope you all have a happy and safe Thanksgiving with family and friends. As always…