What does the Abbeville football team and the pilgrims have in common?

They are always mentioned on Thanksgiving. (feel free to use that over your turkey and dressing this week)

A hard fought 24-7 victory versus North Central guaranteed a Turkey-Day practice for the boys from A-Town. In most years a Thanksgiving practice means an Upperstate Championship game appearance, but this year because of Hurricane Florence’s regular season interruption, things got pushed back a week. It was no walk in the park for the Panthers however. North Central was a tough, scrappy bunch that stood toe to toe with Abbeville. At least defensively. The Knights crowded the line of scrimmage, blitzed nearly every play and left little room for the Panthers offense to operate. Abbeville scored quickly as they only needed four plays to find pay dirt after they received the opening kickoff. Courtney Jackson (13-42-1) scored first from five yards out and a Dylan Beauford PAT put the Panthers up 7-0 just a minute and thirty one seconds into the game. A North Central punt gave the Panthers the ball back and Ja’Bryan Sanders (10-71-1) scored with 6:11 to play in the first quarter. Abbeville 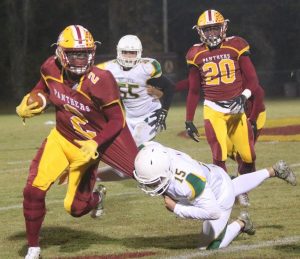 jumped out to a 14-0 lead before the home crowd could get settled in their seats. But that’s when the game changed. The barrage of rushing yards and scoring ended. Both defenses began playing at a very high level and yards were at a premium. The Panthers defense harassed the North Central quarterback all night. The defensive line, Carson Smith, Nate Temple, Ar’Darius Burton and Jihad Washington were virtually unblockable.  Cruz Temple collected another interception as North Central completely gave up on even trying to run the football. The Panthers limited the Knights to negative 41 yards rushing for the game. The third quarter was quiet, but the Panthers put together a nice scoring drive at the end of the third. JD Moore (10-68-1) bulled his way into the endzone with 11:54 to play in the 4th quarter to put the Panthers up 21-0. A Dylan Beauford 31 yard field goal stretched the lead to 24-0 on the next Panther possession. North Central scored with 17 seconds left in the game to erase the shutout. The Panther defense held North Central to 133 total yards. Although, the Panther offense was held to it’s season low, 285 total yards including 270 on the ground, which is 65 yards less than their season average.

The Panthers moved to 11-0 on the season. Winners of 19 straight games, they will get to protect their home field at least once more this season. They may have dropped Pageland from their name, but to Abbeville fans and former players, Pageland-Central represents some of the toughest played games in Panther football history. We’ll have a full preview of the Panthers versus the Central Eagles posted later this week. As always…