The Panthers advanced to the 2nd round of the South Carolina AA Playoffs last Thursday with a 54-13 win over the Andrew Jackson Volunteers. The win put the Panthers in the 2nd round for the 23rd consecutive season. You read that right. Abbeville has advanced to at least the 2nd round of the playoffs every year since 1995. This year’s 2nd round opponent will have basically the same drive as Andrew Jackson had. The North Central Knights also hail from Kershaw, SC and they will make the trek to Hite Stadium this Friday night to try their bid at upsetting the top ranked, undefeated Panthers. Here’s a preview of Friday night’s contest.

North Central (8-3) will get their very first ever shot at A-Town Friday night. The teams have never met on the gridiron. The one common opponent the two teams share this year was Andrew Jackson. North Central beat AJ 28-17 on September 12th. The Knights finished 5-1 and in 2nd place in Region 4-AA. Their only conference loss came to the hands of region winner, Buford, who shut them out 21-0. A Week Zero loss to Camden (38-0) and a week 3 loss 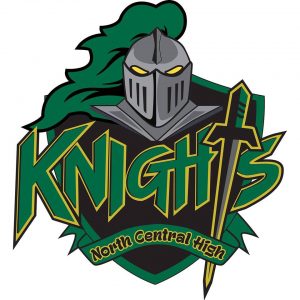 to 1-A powerhouse Lamar (33-7) are the only blemish’s on an otherwise impressive resume. Coach Tyrone Drakeford has brought North Central to new heights this season. A playoff win and an 8-3 record is the best season the Knights have enjoyed since a 6-5 record and a playoff birth in 2012. The Knights will try to spread out the Panthers defense with four and five wide receivers most of the night. They will maintain a balanced attack by running and throwing out of their wide open formations. This team uses everybody. Multiple quarterbacks, multiple running backs and a slew of receivers as well. QB #6 Austin Bowers a 5’10” 160lb junior (56-95 852 yards 13 TD 8int-34 rushes 155 yards 1 TD) will see the majority of the snaps and lead an offense that averages 29.4 points per game this season. North Central will also use #1 Avante Reynolds in a variety of ways, QB, RB and WR (29-54 488 yards 7 TD–19 rushes 87 yards–5 rec 76 yards). Reynolds could be the best athlete on the North Central roster. Team captain and senior #8 Jamel Jones (53 carries 459 yards 6 TD–13 receptions 158 yards 1 TD) is the workhorse at RB for the Knights. The big receiving threat that the Panther defenders will have to blanket is #13, 6’1″ 170lb Markell Portee (30 receptions 634 yards 11 TD). He’s big, fast and very good in open space. The Knights defense is giving up 18.3 points per game this season and #15 Kaleb Haven and Jamel Jones are huge contributors at linebacker for the Knights.

As for the Panthers, they just continue to do Panther things. All season we’ve chronicled the dominance they’ve displayed on the football field. As records fall and streaks lengthen, the boys in Garnet and Gold seem to keep their head down and just go to work. During a conversation with Head Coach Jamie Nickles earlier this week he mentioned, “These guys just love each other. They want to win for each other. They want to block for each other. They are just a big ole’ family and they want it for their brother as badly as they want it for themselves.”

Wants and desires are futile if you’re not willing to work to see those things to fruition. And work is exactly what they’ve done this season. The Panthers offense is averaging 46.5 points per game. The four headed monster in the offensive backfield is running behind what some are calling the best offensive line in Abbeville football history. Jake Hill, Trai Jones, DeMichael Johnson, DaDa Bowie, Conner Nickles and Tillman Allen at tight end, have bulldozed their way through their first ten adversaries. Depth has been a big key for this team this season. The additions of youngsters Davis Sutherland, Ean Laughlin, Demetris Harris, Jake Adams and Pierce Royster on the O-Line has built quality depth and allowed the first five guys to have fresh legs this deep into the season. Offensive line coach Wayne Botts has got to be giddy when thinking about his future Hogmollies. The guys 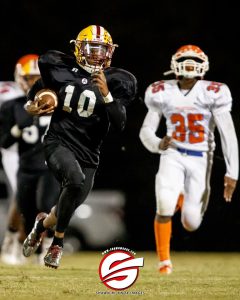 that get a lot of the headlines and spotlight are the A-Town running backs. And they deserve every bit of praise that can be bestowed upon them. The ground game has produced 3,417 yards this year on 388 carries. That’s an average of 8.8 yards per carry over the course of 10 games. Impressive. The Panthers have reached the endzone 51 times via the run game this season. They’ve held on to the ball extremely well too. The Abbeville offense has lost 6 turnovers all season. Junior QB JD Moore leads all rushers (100-1,027-17) in attempts, yards and TD runs. He averages 102.7 yards per game on the ground at a clip of 10.3 yards per carry. Senior Shine Bowl participant Courtney Jackson (74-732-13) is a averaging 9.9 yards per carry. A first down every carry, again, impressive. The Bus, Dominick Washington (71-619-3) and super speedster Ja’Bryan Sanders (47-442-10) round out the four headed monster. Throw in sure handed Quad Woods (9 receptions- 120 yards- 4 Tds) and you’ve got a very talented, very fast, very physical offense. The recipe for success.

As much love as the offense gets, the Panther defense might be best group on the field. Depth, again plays a huge part. No Panther starters play on both sides of the ball, which is a rare feat for a AA school with less than 500 students. There seems to be a new star each week and that’s part of the reason the Panthers are only allowing 8.9 points per game this season. Sophomore Cruz Temple (61 tackles-1 sack-4 ints) seems to be hitting his stride at linebacker. He had 17 tackles versus Ninety Six and he swiped two interceptions versus Andrew Jackson. Big brother

and Shrine Bowl selection Nate Temple (62 tackles – 9.5 sacks) couldn’t let little brother have all of the spotlight. So he added three more sacks last week to his already team leading total. The Panther linebackers enjoy space to roam and find the football because of the success of the Panther defensive line. Carson Smith (72 tkls – 10 TFL – 3.5 sacks) Ar’Darius “Bone” Burton (37 tkls – 5 TFL) and Jihad Washington (41 tkls – 2 TFL – 2 sacks) have allowed the Panther linebackers to make 208 total tackles on the year. Led by team tackle leader Tyreke Campbell (74 tkls-5 TFL-1 sack) and sophomore Luke Evans (63 tkls-3 TFL), not much gets by these guys. The defensive backs have played as well as you could have hoped this year as well. David Cobb (57 tkls – 6 TFL – 2 Int), Joc Norman (41 tkls), Gabe Calhoun (35 tkls – 2 TFL – 1 int), Malik Leach (55 tkls – 1 int) and Jhalyn Shuler (57 tkls – 6 TFL – 1 int) lead the charge against team after team that runs four and five wideouts on the field. Don’t forget about Junior kicker Dylan Beauford who is 3 of 4 on field goals, 47 of 54 on extra points and has boomed 44 of 80 kickoffs out of the endzone. He’s helped pin opposing offenses deep in their own territory most of the season.

North Central represents an unfamiliar foe. They are a worthy playoff caliber team with talent in multiple places. This could be the biggest test of the season for the Panthers. North Central has also issued a challenge to their fan base. They want to turn Hite Stadium green. Weather has been an excuse for many Panther fans as of late, but surely on a clear, dry and cool November night, Panther Nation won’t let an opponent even out their home field advantage. Come early, let’s pack The Hite, be loud and show these Panthers how proud you are of them. Kickoff is set for 7:30 and the gates will open at 6.  As Always…