It’s about this time of year, a little rain moves in and the sweltering summer temperatures finally break. There’s a crispness in the air, the leaves begin to change and darkness comes earlier and earlier. When Autumn rolls around each year, you can rest assured that the Abbeville Panthers are still hard at work preparing for the final third of their season. It’s playoff time again and this year’s Panther squad has their eyes set on history. However, you can’t win a fourth consecutive State Championship unless you win round one first. Hite Stadium will be alive and rockin’ as the Panthers welcome in the Andrew Jackson Volunteers this Thursday at 6pm.

Andrew Jackson finished the season with a  6-4 record and grabbed the final #5 seed by finishing 5th in Region 5-AA. The Vols won their first four contests of the season before dropping 4 of their next 6 games. Their losses, North Central (28-17), Buford (28-7), Chesterfield (17-14) and Pageland Central (45-14) were all region games. As you can see most were tightly contested games and that gives a big nod to the AJ defense. 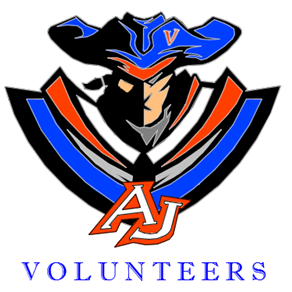 Abbeville head coach Jamie Nickles said “These guys are huge up front. They have the biggest defensive line we’ve played this season. Big and strong. It’ll be a game won in the trenches, and they have some big ones.”

Andrew Jackson had five players earn first-team all-region honors, including #99 Ben Hinson, the region co-defensive player of the year, as an offensive and defensive lineman.
Senior #22 Luke Faulkenberry was selected as a running back, while sophomore receiver #3 OJ White was named to the all-region team. AJ senior kicker #5 Avery Funderburk was selected as the all-region kicker and #7 Jamie Hinson, a Vols senior, was chosen as an athlete. Hinson is a player that wears many hats for AJ. They use him a kick returner, slot receiver, running back, he’s even taken snaps at QB. It’ll be interesting to see how Vols head coach Todd Shigley uses him against the Panthers. Shigley, in his 2nd season at the helm of the Vols, missed the playoffs last season with a 3-7 record, but doubled last year’s win total already this season. AJ averages 27.3 points per game on offense, while giving up 16.7 points per game. Their wide open, tempo based spread offense hinges on #8, junior QB Chas DeBrul. He has a big arm and can scramble as well. DeBrul’s numbers are off this year, as he broke his collar bone earlier this season, but returned to play the last game of the year. In DeBruls first game back, he tossed two touchdown passes and clinched a playoff spot for the Vols.

The Panthers are poised, focused, rested and healthy. The team is aware of the historic run they are on. They are

salivating at the chance to begin the playoffs and stake their claim as one of the best to ever wear the A. This year’s senior class has never lost a playoff game. They are 15-0 in playoff games. They have never lost a home game. Should the Panthers win this week it will be the 30th consecutive home win and the 17th consecutive win overall. No Senior class has ever played in as many games, won as many rings or dominated in the way that this year’s Senior class has dominated. Blame it on whatever you choose; Talent, consistency, continuity, coaching, conditioning or maybe there IS something in the water. Whatever the reason, the boys from A-Town are ready to get after it. The Panther have outscored their opponents 411-80 this season. That’s an average of 45.6 – 8.8. Abbeville’s scoring defense is ranked 3rd in AA while it’s offense ranks #1. The offense averages 8.7 yards per rush attempt this season. They’ve found the endzone 44 times on the ground and have only given up 4 rushing touchdowns on defense this year. The Panthers are +21 in the turnover margin and holds the opposing offenses to 16% on 3rd down conversions. The offense has been a big play, quick strike offense all season long, posting 56 runs of 20 or more yards. Coach Nickles won his 10th Region Championship as head coach with the 38-8 win over Ninety Six and finishes the regular season with an all-time record of 156-39-1.

Round 1 of the AA South Carolina Playoffs begins this THURSDAY night at 6pm. Gates open at 5pm. Only South Carolina High School League passes are accepted at the gate. Booster Club passes are null and void during playoffs. Admission is $8 and the clear bag policy is still in effect. Come out and see the Panthers as they try to extend their historic streak, and continue on the playoff road to Columbia. As Always…