The Untouchables. No, not the 1987 movie with Robert De Nero and Sean Connery. I’m talking about the 2018 Abbeville Panthers. They have proven once again to be, untouchable. Teams that run the option, teams that run a spread. Teams with great quarterbacks, teams with great linebackers, running backs, head coaches, teams with great wide receivers. None of them could touch the 2018 Abbeville Panthers. Teams with twice the student enrollment. Teams with much nicer facilities, newer uniforms, shiny buses and an array of fancy pre-game entrances. None of them could hold a candle to the boys from A-Town. The Abbeville Panthers just completed the 2018 season undefeated, untied and honestly, untested. You’ll never hear a coach or player mutter those words because of the culture instilled into the program. Numbers however, don’t lie. As the clock struck zero Friday night, and the Panthers collected their 27th Region Championship and #1 seed in the AA playoffs, reflections of one of the single greatest seasons in Panther Football history came to mind.

Remember the hype that preceded the opening game at Lincoln County? The “game ‘cross the river” was going to be a measuring stick. Nobody walks into Larry Campbell Stadium and wins easily. The Panthers then proceeded to roll to a 57-0 victory. The worst home loss in Lincoln Co. football history. The most points ever scored by an opponent in LC football history. That was foreshadowing. That was a precursor to things still to come. Southside Christian was the only team to come within two scores of the Panthers all season. The Panthers finished the regular season 9-0 and beat their opponents by an average of 45.7 to 8.9. The powerful A-Bone offense rushed for an average of 339.8 yards per game. As a team the Panthers averaged 8.7 yards per rush. They only turned the ball over four times the entire season and scored 44 rushing, and 9 passing touchdowns on the year. The Panthers were kings of the big play this season as well with 56 plays of 20 or more yards on the year. That is an average of 8 plays of 20 or more yards per game. Offensively, it wasn’t a one man show, more like a committee of stallions daring anyone to get in their path toward greatness. While many more contributed, for the sake of time and space, here are some individual numbers on the season, offensively, for the Panthers.

Of course the Panther skill players would shift all of their praise and eye popping numbers toward their offensive line. The big boys up front paved the way for one of the most prolific offenses in Abbeville Football history. The combination of Jake Hill, Connor Nickles, Trai Jones, DaDa Bowie, DeMichael Johnson and Tillman Allen at Tight End, battered, bruised and bullied opposing defenses into submission all season long. The O-Line looked like they were in mid-season form from the opening kickoff in August and they only improved as the season progressed. Everything starts up front, and this group of Hogmollies deserves all of the praise and spot light as any position group on the team.

I’m not sure there are enough adjectives, adverbs and praise that can be typed to accurately describe the Abbeville defense this season. They willed their way to three shutouts, and three other games where only one score was surrendered. They routinely stymied the toughest of offenses in a variety of ways. There were goal-line stands, huge hits, tackles for loss and a truck load of turnovers created by one of the most prolific defenses in Panther football history. Instead of writing a novel with all of the different defenses stats, we’ll just post this stat page for your viewing pleasure. 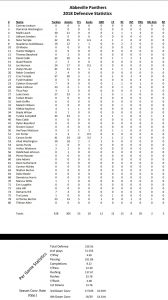 This may seem like a ‘mission accomplished’ article. When in reality, it’s not. I’m merely closing one chapter as we get ready for the real season. Championship Season. This team’s record is now 0-0. The playoffs are a completely different beast. It’s do or die, every week. Win or go home. They boys in Garnet and Gold know what’s at stake, and they are primed and ready to make a run at a fourth consecutive AA State Championship. The mission is clear, and the first test toward greatness is going to be played on Friday, November 9th at 7:30pm as the Panthers welcome to Hite Stadium the Andrew Jackson Volunteers in Round 1 of the AA State Playoffs.

We’ll be taking a break with the team this week, and be back next week with a full preview of the Panthers round one game. As always…