So, we meet again. The 46th meeting between the Panthers (7-0) and Tigers of Saluda (5-3) will take place this Friday night at Bettis Herlong Stadium. Abbeville holds an all-time record of 30-15 against the Tigers. These two teams have played some classics over the last handful of years. The last three years the Panthers and Tigers have played in the Upperstate Championship game against each other. The Panthers won all three games in route to their current streak of three consecutive AA State Championships. This weeks game may not hold a trip to Columbia as the final prize, but major region and playoff implications are at stake. A playoff atmosphere, high energy and a swell of emotion will certainly fill a packed house Friday night. Let’s take a look at how both teams have faired so far this season.

Tiger Head Coach Stewart Young has led the Saluda football program to it’s most successful run in program history. Since taking over in 2014 Young has put together a 34-7 record over the last three years. This edition of Tiger football is quite impressive as well. All the lights shine on three year starter, quarterback #8 Noah Bell. The 6’2″ 205lb junior is the leader of the team. A big accurate arm, quick precise decision making, and the speed to escape the pocket makes Bell the most dangerous, complete quarterback that the Panthers have faced this s 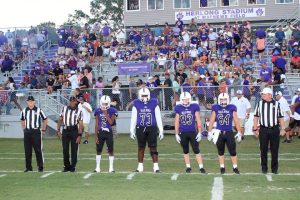 eason. On the year Bell is 94-185 for 1,571 yards and 21 touchdowns. He’s not the only player on the team of course, Kendarius Graham is a senior running back that gets his share of carries, and catches. Graham at 5’8″ is small in stature, but runs big. He has speed to get to the edge and he can lower his pads and pick up yards between the tackles as well.  Saluda is a spread team, like many are these days. They will put four and five wide receivers on the field often. They are also not scared of a trick play or a gadget formation. It’s fun to watch the creativity of the Saluda offense. The Tigers are averaging 32.8 points per game on offense, while allowing 16 points per game on defense. The common opponents with Abbeville so far this season are Southside Christian (30-17 loss), Sliver Bluff (10-0 win) and Fox Creek (41-0 win). Saluda will play Batesburg-Leesville next week to finish out their region schedule.  The Tigers have lost 8 of the last 10 games versus the Panthers. Five of those contests were in the playoffs where the Panthers won all five. The Tigers only wins in the last 10 games came in 2003 (9-7) and in 2013 (10-7). So if history is any indicator, the Tigers want to play a low scoring game.

To say the Panthers are rolling, is an understatement. Offense, defense, special teams, they are clicking and hitting their stride at the right time. It’s almost championship season, late October and into November is when you want to hit your peak as a team, and that seems to be case at Abbeville High. A smothering defense and a big play offense have complimented each other all season. The Panthers are 7-0 on the season 3-0 in region play and have outscored their opponents 342-59. A-Town averages 48.9 points per game on offense and is allowing a measly 8.4 points per game on defense. There’s a new leader in the clubhouse defensively too. Carson Smith is your new leading tackler, which is crazy considering he’s a defensive linemen. Leading tacklers usually play in the linebacking

corps. Smith has recorded 45 tackles, 8 tackles for loss, 3.5 sacks and has caused and recovered a fumble this season. The Panther defensive line has been disruptive and dominate so far this year recording 23 tackles for loss and 11 sacks. And that’s just the starting four. This defense gets off the field as well any team ever. They have only allowed 11 of 76 3rd down conversions this season. That’s a 14.4% success rate for opposing offenses. It helps when you are +19 in the turnover category as well.

The other side of the ball hasn’t been too shabby either.  The Panther offense is built on speed and physicality. The O-Line takes pride in bulldozing their way down field while one of six different ball carriers zip by defenders at a break-neck pace. The Panthers average 343.6 yards per game rushing. Starting QB JD Moore leads the clubhouse with 703 yards on the ground and 12 touchdowns. Moore, Courtney Jackson, Dominick Washington and Ja’Bryan Sanders, have combined for 1,891 rushing yards and 29 touchdowns. Moore has also thrown 8 touchdown passes on the season. Gabe Calhoun has emerged as a huge threat in the punt return game as well. Big plays and quick strike capability has been the offense’s calling card this season. The Panthers have hit their opponents with 44 plays of 20 or more yards this season. That’s over 6 plays per game of 20 or more yards, on average.

Can the Panthers continue their historic run? Can Saluda get revenge for three season’s worth of heartbreak? Find out at Bettis Herlong Stadium Friday night. Kickoff is at 7:30. As always…