Another familiar foe will roll into Hite Stadium Friday night. The Silver Bluff Bulldogs will make the hour and a half trek up Hwy 28 to take on the undefeated, unanimous number one ranked Abbeville Panthers in a Region 2-AA battle. The Panthers and Bulldogs have shared the spotlight on the biggest of stages before. In 2000 the Bulldogs defeated Abbeville at Williams Brice Stadium to capture the State Championship in an instant classic. The Panthers returned the favor in 2015 at Charlie W Johnson Stadium, when they beat SB 45-27 to capture their 7th State Championship. All in all the Panthers and Bulldogs have met 10 times in their history, with the Panthers holding a 6-4 advantage in the series.

This season, head coach D’Angelo Bryant will bring his Silver Bluff squad into Hite Stadium looking for their first Region win of the season. SB is 3-3 on the year and 0-2 in Region play. The Bulldogs, after 23 very successful 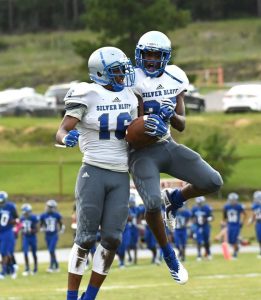 seasons under the direction of Al Lown, have found themselves in a rebuilding mode as of late. Lown suffered one losing season in his tenure, and since his departure in 2015, the Bulldogs have gone 3-7 and 5-6 in the last two seasons. Bryant has brought in a renewed enthusiasm to the Bulldog program that he once played for, under Lown. In fact Bryant was on the 2000 State Championship team that beat Abbeville. In an article from the Aiken Standard newspaper, Bryant was quoted as saying, “The great part about it is these guys, their freshman year, were under my former head coach, coach (Al) Lown,” Bryant said. “I think that they see some of the same principles that I carry on through coach Lown as well. Just really getting back to that type of standard is my No. 1 priority for these guys, but to also bring a little bit of my style and my flavor of some things that I’ve done.”

His style and flavor stared with changing the entire offense. No more double wing for SB. They are now a spread team who run’s primarily a run-pass-option (RPO) style of offense. Yet they still incorporate some of the Wing-T principals. Defense has always been the calling card for the Bulldogs. On the season SB is averaging 28.3 points per game while giving up 17.3 on defense. The linebacker corps may be the strength of the Bulldog defense. The senior laden group is led by #14 Jamey Bing, #7 Jarvis Brown and #21 Jimmie Foreman. #3 Jamal Washington is the do it all QB for SB, he’s also a senior. A big arm and plenty of speed, Washington is the catalyst for the SB offense. #25 Dameon Green, another senior is a team captain and plays free safety. In all the Bulldogs have 21 seniors on their roster. Coach Bryant definitely has this program on the upswing, and mark my words. It won’t be long before Silver Bluff is playing for championships again.

The Panthers (6-0 2-0) are riding a wave of momentum that few programs have ever experienced. Undefeated and three time reigning State Champs, they’ll be putting their 28 game home winning streak on the line. In fact the Panthers are on a 14 game overall winning streak. The last loss was at Newberry College last season vs. Hartsville. Last week it seemed like a business trip to North Augusta. This week, there will be a little more juice in the tank. Back at home, under the lights, and a traditional powerhouse program to face. The Panthers players have one goal in mind. Every player interviewed says they want to win of course, but they want to be better than the 1996 edition of 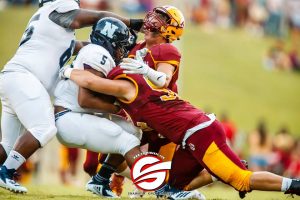 Panther football. That’s a tall task, as the 1996 team is debated as the best to ever wear the Garnet and Gold. The 2018 Panthers are well on their way. They have beat their six opponents by an average score of 51-8. They’ve pitched three shutouts and seems to score at will. The Panthers are averaging 357 yards rushing per game. They are accomplishing that total at an average of 9.4 yards per rush as a team. The turnover margin is astronomical. The Panthers have only turned the ball over twice this season on offense, while getting 22 turnovers on defense. A +20 turnover rate would make any coach in the country happy. Defensively the Panthers have only allowed 11 third down conversions all season as well. Opposing teams are converting 3rd downs at a rate of only 16.4%. To compare that number, The University of Miami leads all of college football with a defensive 3rd down conversion percentage of 19.8%. Bama, 29.4%. As you can see, the Panthers are playing an incredible brand of defense this season.

Hite Stadium will be alive with enthusiasm Friday night. The weather will be perfect and the Panthers will be trying to take one more step toward a Region Championship, and moving a step closer to the playoffs. Remember a clear bag policy is still in effect at Hite Stadium. Also, the handicap section at Hite Stadium is marked with blue paint and the handicap logos. No bag chairs should be placed in this area, as it is designated for fans with disabilities. Also, photographers must have an Associated Press pass to take photos on the sidelines. October is Breast Cancer Awareness month, and all Panther fans are encouraged to wear Pink to the game. It’s a PINK OUT at Hite Stadium-Dennis Botts Field. Kickoff is set for 7:30. As always…