The anticipation of the 2018 season is almost hitting a fever pitch. We are only a little over a week away from the WCTEL Kickoff Classic at Hite Stadium. That’s right, August 3rd at 6pm you will get to hear the pads popping and whistles blowing at Hite Stadium for the official kickoff of the 2018 season. Last week we gave our preseason predictions for the first three weeks of the season. Today we’ll look at games four, five and six on the Panthers schedule.

Southside Christian has made major strides as a program over the last ten years. The Sabre’s at one time were playing in a lot of homecoming games. In 2014 they strung together a 6-5 record, and have yet to have a losing season since. In fact the Sabre’s won a Class A State Championship in 2015. A bump up to the 2A ranks in 2016

yielded another 6-5 record, but the Sabre’s went 10-2 last season and have some momentum headed into this year. What does that translate to as far as the Panthers are concerned? Well, not much. You’ll see varying styles of play on September 7th. The Panthers will grind it out on the ground while SSC plays a spread, up tempo style of offense. In their only two meetings the Panthers have won 42-21 and 33-14. I expect to see a similar outcome this go-round. The Panthers might have their hands full in the early stages of the game, only to wear out the Sabre’s with a physically punishing rushing attack and solid interior line play.

After an open date on September 14th, the Panthers will travel across the Palmetto State to one of the most iconic stadiums in South Carolina high school football. Kellytown Stadium is the sight for what is sure to be an old

fashioned donnybrook. A real slobber knocker. A bloody nose kind of game. The Panthers and the Red Foxes of Hartsville have put on quite a show over the last couple of seasons. Each team winning a game on the neutral field at Newberry College, both in dramatic fashion, has set the stage for what is sure to be a exciting contest. Round 3 of a heavyweight fight is what this one already feels like. The Panthers only loss last season came to the 4A state runners-up by a score of 28-21. So, what happens this year? My guess is much of the same. You’ll see two teams who love to physically dominate their opponent, bash each other until one team folds. The problem is, neither team ever folds. Last season the Panthers lost by a touchdown, but turned the ball over four times. With their backs against the wall, in a hostile environment, the Panthers win one for the history books.

They’ll turn the lights on at Hite Stadium for the first time in over a month when the Panthers of Batesburg-Leesville visit A-Town, in the first Region game of the year. To anyone who’s been paying attention over the last 30 or 40 years, these two teams are fierce rivals and they love to beat up on each other. The last time they played, all the marbles were on the table. The Panthers won their 2nd consecutive State Championship in 2016 versus B-L by a score of 44-21. B-L h 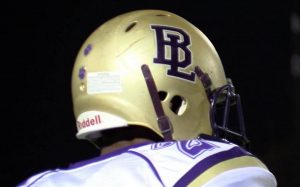 anded A-Town their worse home loss in decades in 2014 by a 46-0 score. Abbeville then bounced B-L from the playoffs that same season, beating them on their own turf 34-28. B-L finished 7-6 last season, but made a run in the playoffs, losing to Barnwell in the 3rd round. B-L hasn’t been the model of consistency lately with a few coaching changes over the last few years. The boys from A-Town will be protecting a long home game winning streak by the time this one rolls around. Expect standing room only as this rivalry renews. I guarantee the Panthers will win this one. (see what I did there) But my guess is the Panthers in Garnet and Gold will grab the bragging rights this season.

We’ll wrap up our Preseason Preview next week with Volume 3 covering the last four games of the regular season. As always….God Bless and Go Panthers!