Fifty, no it’s not the number of laps around the field Coach Nickles runs on his lunch break. It’s not the number of games in a win streak or the number of trophies in the trophy case. Fifty is the exact amount of days before you will see the boys in Garnet and Gold take the field for the West Carolina Kickoff Classic. The unofficial beginning of the 2018 football season is only fifty days away. It seems like just yesterday the Panthers were hoisting the AA State Championship trophy at Benedict College. Yet, here we are. Only a hot, humid southern summer away from starting over, and competing for what could be a very historic season.

The Panthers will break in a fourth starting quarterback for the fourth year in a row. I’ve tried to find information to see if any team has ever won three straight State Championships with three different starting QB’s. As you can imagine, that info is impossible to find. We know it’s happened at least once, as the feat was completed back in December. Joseph Battle was the Panther QB in 2015, Jamie Gray was the signal caller in 2016, and Bryce Jackson last season. This year, it’s JD Moore‘s turn to lead the offense. Moore, a Junior, filled in nicely last season while

Jackson was injured. Specifically JD Moore stepped in and led the Panthers to a third round playoff win versus Cheraw. Not an easy task for a first time starting sophomore. He handled the pressure with ease and we got a glimpse of what the future will hold for the Panthers, and let me be the first to tell you. The future is very, very bright. Moore, not as big in stature as the previous three QB’s, but Moore may be the fastest of the championship bunch. The 7 on 7 season has begun already and Moore is getting his timing and chemistry with his wide receivers down pat. The Panthers are primarily a running team, but the presence of a passing attack opens up the running lanes for the bevy of talented Panther running backs.

Speaking of talented running backs. I’m sure the Panther coaching staff is chomping at the bit to unleash Courtney Jackson this season. As most of you know, Jackson suffered a season ending knee injury last season during the Hartsville game. He played in 6 of 15 games last season and amassed 525 yards rushing and 9 touchdowns on just 43 carries. He also returned a kickoff for a touchdown. His understanding of the blocking schemes of the offense, his determination and shear speed alone will be a huge asset for this Panther offense. The offense lost a lot of production to graduation. Jr. Rapley, Bryce Jackson and Jermaine Blackwell combined for 2,967 yards and 42 touchdowns. That’s good enough for 62% of the total rushing yards and 68% of the rushing touchdowns from last season. But, if you’ve been paying attention. The Panthers don’t really rebuild. They just reload. Joined in the backfield with Jackson this season will be a 3 or 4 or 5 headed monster. Dominick “The Bus” Washington will play a big bruising role, as will Robin Crawford. Combined, last season Washington and Crawford ate up nearly

1,000 yards and scored 7 touchdowns. Expect to see the blazing fast JaBryan “Dooley” Sanders taking handoffs this season, as well as stretching the field from the wide receiver position. Jhalyn Shuler will have a bigger role offensively this season as well. He’s a physical specimen that is drawing a lot of attention from the numerous college scouts that are camping out a most practices. The Panther offensive line is big, mean, and experienced. Jake Hill will be the Senior leader of this group. Hill at 6’3″ 260+ is getting a lot of college love in the off season as well. Conner Nickles, and Trai Jones are road graders that will be anchors up front for the Panthers. Add in Tillman Allen at the Tight End position, and the Panthers may be deeper, and bigger across the offensive front than at anytime in recent memory.

Graduation took a few long-time starters off of the defensive side of the ball. I have to admit, it’ll be a little strange not seeing Whoodie Goodwin on the field. The same goes for Charles Holback and Tae Rayford. Those guys left a proud defensive legacy and set the bar for the next group of Panther defenders. Don’t start feeling sorry for Panther DC Tad Dubose just yet. He has talent and experience to pull from this season. Nate Temple and Carson Smith are poised to have stand-out seasons on the defensive line. Malik Leach and David Cobb will be key 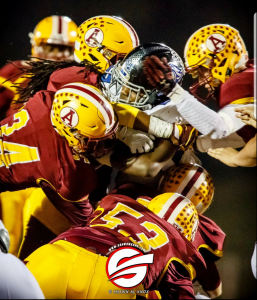 pieces to the defensive backfield too. They combined for 184 tackles and 4 interceptions last season. It’s been rumored that Cruz Temple may see time at linebacker this season, add in sophomore Luke Evans, and that will be a fun group to watch terrorize ball carriers this season.

The roster is always a fluid, every changing and evolving work in motion during this time of year. Half of what you just read could change pretty quickly. We’ll keep you updated as 7 on 7 camps come and go and summer practice gets underway. The Panthers will practice at Strom Thurmond on June 19th, and the FCA 7 on 7 tourney will start at 8:30am on June 26th at Grace United Methodist, before taking to the practice fields and Hite Stadium. Summer practice officially starts on July 30th.

Check back often as we will get you ready for the 101st season of Abbeville Panther Football.