Here we are. The 15th and final game of the season. The game we’ve all hoped for. The game the players have worked their tails off for. The ultimate prize in high school football awaits the winner. The 2017 AA State Championship Game will be played Friday December 1st at 5pm between the Bamberg-Ehrhardt Red Raiders and your Abbeville Panthers. 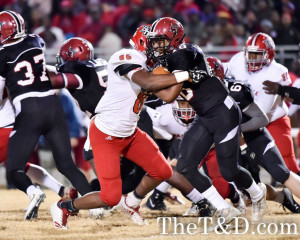 recently in 2014. The owner of 10 AA Lowerstate Championships the Red Raiders are no stranger to success. Head Coach Kevin “Butch” Crosby has been at the helm of the Red Raiders for 10 seasons and has collected a 105-24 record. Coach Crosby has taken his Bamberg team to at least the Lowerstate Championship game in 6 of his 10 seasons. This season the Red Raiders are 13-1 on the season. A lone 12-0 loss to Scott’s Branch is the only smear on an otherwise stellar season. B-E has also played in a couple squeakers this season. A 7-0 overtime win in week zero versus Woodland and another overtime win, 27-21 versus Batesburg-Leesville shows that this B-E team knows how to find a way to win. After all, they wouldn’t still be playing this time of year if they didn’t know how to win. The Red Raiders hang their hat on their defense. They’ve pitched six shutouts this season, holding Woodland, Edisto, Silver Bluff, Barnwell, Allendale-Fairfax, and Carver’s Bay all scoreless. The real eye opener was the shutout of Carver’s Bay, who at the time had the state’s #1 scoring offense. The Red Raiders defense has given up on average 5.6 points per game. That’s a total of 79 points, over 14 games, all season. Impressive. The B-E offense scores an average of 27.1 points per game. They mix in the run with the pass, a balanced attack, mostly all out of a spread, shotgun formation.

The back to back defending AA State Champs are chasing history. This senior class has played in more games already (57) than any other class in school history. The Panthers players and coaches are trying to become the first team ever at AHS to win three State Championships in a row. The Panthers are 8-3 all-time in State Championship games. The wins, which are on display inside Hite Stadium came in 71′,81′,91′,96′,10′,11′,15′ &

16′.  The Panthers fell short in 2000 to Silver Bluff, 2002 to Carver’s Bay, and a three-peat fell short in 2012 to Bishop England. The Panthers, like their opponents are 13-1 on the season. The lone loss was a 28-21 game to Hartsville, who is playing for the AAAA State Championship on Saturday at Williams-Brice Stadium. The Panthers are led by head coach Jamie Nickles, who in his 14th season has amassed a 146-39-1 overall record. A win would tie him with Hall of Fame coach, the late Dennis Botts for the all-time wins record at Abbeville High. Coach Nickles has coached his alma mater to a 35-7 playoff record, including a 4-1 State Championship game record. The Panthers have won 14 consecutive playoff games dating back to 2014. In fact, AHS is the 3rd winningest team, in the entire state, regardless of classification when it comes to playoff wins (81-31). Only Lake View and Dillon have won more playoff games than the Panthers. Friday marks the 12th State Championship game appearance for the Panthers, as they close out their 100th season of football.

The Panthers offense has grabbed most of the headlines this season. Senior Quarterback Bryce Jackson, a College of Charleston baseball commit, has been efficient rushing and passing this season. Jackson has passed and rushed for nearly 1,000 yards each this season. The real stat that matters is turnovers. Jackson has only thrown 2 interceptions this season, both versus Hartsville, and he hasn’t lost a fumble. A sign of a good quarterback is one that keeps possession of the ball, and Jackson does that very well. Jr. Rapley has been a man on a mission. His drive and determination to be the best of the best has been a blessing to this team. With over 1,500 yards of total offense and 18 total touchdowns, Rapley has been the focus of opposing defenses as of late. Using Rapley as a decoy has been as beneficial to the Panther offense as when he carries the ball. The Panthers are much more than just Jackson and Rapley however. The entire offensive line has been solid all season. Nickles, Hill, Stone, Jones and Lewis have the mainstays on the offensive line this season and a big reason to the overall success of this team. The Panthers offense has averaged 37.7 points per game this season. Defensively the Panthers are giving up 15 points per game. Speed and tenacity have been the calling card of the A-Town defense. A speedy linebacker corps and defensive backs that can run with anybody have led to some big hits, big turnovers and key stops throughout the season. Malik Leach and Dee Graham have been trading the leading tackler title most of the season. Both have administered over 130 tackles on the season. Nate Temple, and 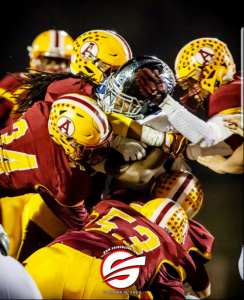 Carson Smith have been key defensive line contributors, with Tay Rayford and Tyrese Paul providing the aforementioned speed on the back end. David Cobb leads the team with 3 of their total 11 interceptions. The Panther defense has faced a number of different offenses all season, and stood toe to toe with the best of them. If speed kills, this A-Town team is a group of assassins.

So what will happen when the Panthers and Red Raiders square off at Charlie W Johnson Stadium Friday night? Your guess is as good as mine. I do feel like Abbeville’s offense vs. Bamberg’s defense will be the major storyline. Can the Panthers put up points on the best defense in the state? Has B-E seen the speed that A-Town will roll out onto the field? This one is hard to call. I do know this. The players are well aware of what is at stake. A three peat and etching their names in the history books forever, is all they are focused on. It should be a real hard hitting, slobber knocker. See ya in Columbia!

Get your tickets at the front office of Abbeville High until 3pm on Thursday and until 10am on Friday. Tickets are $10 and they only accept cash. No parking passes are available this year. The parking lots open at 12 noon Friday, and the gates to the stadium will open at 4pm. If you can’t make the game, WZLA radio 92.9fm will have the play by play action for you. Coverage starts at 4pm.