What Happened: Two elite football programs clashed at Hite Stadium-Dennis Botts Field in a game that produced a State Championship type atmosphere. The Panthers and Red Devils traded blows and showcased the athletes that make each program special. Lincoln County received the opening kickoff, and the fourth play of the drive saw the very athletic LC quarterback Javon Reid scamper 59 yards for a touchdown. The Panthers, sporting their yella’ britches for the first time this season, answered the bell with a Junior Rapley touchdown run on the very next possession.

The Turning Point: The Panther defense stiffened and shut out the Red Devils the rest of the first half. Two 2nd quarter Bryce Jackson touchdown runs extended the Panthers lead to 21-7 just before halftime.

When It Was Over: This one wasn’t over until late. The capacity Abbeville crowd definitely got their money’s worth. LC scored in the 3rd quarter to close the gap to 21-14. A 24 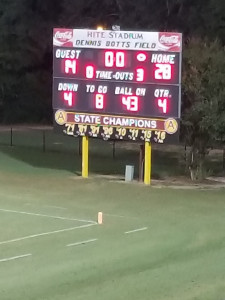 yard Courtney Jackson touchdown run and an ensuing defensive stand put the nail in the coffin mid way through the 4th quarter and the Panthers extended their unbeaten streak to a state best 27 games.

What’s Next: The #1 ranked, back to back State Champs will welcome the Clinton Red Devils to Hite Stadium this coming Friday night. Clinton got their first win of the season, defeating Aiken 47-33. This is the last game of the three game home stand before the Panthers hit the road again on Sept 22nd at Mid Carolina.